With Thanksgiving coming up, I have been all about the pumpkins.   Completely versatile, pumpkins can go savory or sweet and can be used in ravioli, risotto, pies, cakes, lattes — the list goes on and on.   Last year, for a “Pre-Thanksgiving” dinner with friends, I made a bourbon pumpkin cheesecake that was actually really easy and a fantastic addition to the fabulous spread of desserts we had.   I may make it again this year, perhaps with a salted caramel twist.  (I’ll admit, I’m easy prey for some of the food trends, but salted caramel is really just awesome.)  For our recent winery trip, I thought we might want sweet treats to go with the Empanadas so I made Spiced Pumpkin Doughnuts with a Maple Icing Glaze.  The confectioner sugar-based icing is the perfect complement to a well spiced pumpkin dough.  I’d never made doughnuts before and was pleasantly surprised by how easy they were to make.  The one tricky part was making sure that the shortening remained the right temperature.  Too hot and you burn the doughnuts — too cool and they become soggy and oily.  If you don’t have one, it’s best to invest in a candy/oil thermometer before trying to make the doughnuts.

Mr. Kitchen was my sous-chef on this one — we had a great time trying to make sure neither of us got third degree burns from splattering oil.   As Mr. Kitchen found out — it’s best to gently place the dough in the oil — dropping it in = nasty blisters.  There were the obligatory Dunkin Donuts “Time to make the donuts” references and lots of expletives as I grew impatient and tried rolling out the dough before it had totally chilled.  Don’t try that — it’s an exercise in futility.  Of course we just had to try the doughnuts out — you know, to make sure they were edible.  (I think we probably “tasted” half a dozen each.)  If this keeps up I’ll never fit in my wedding dress. 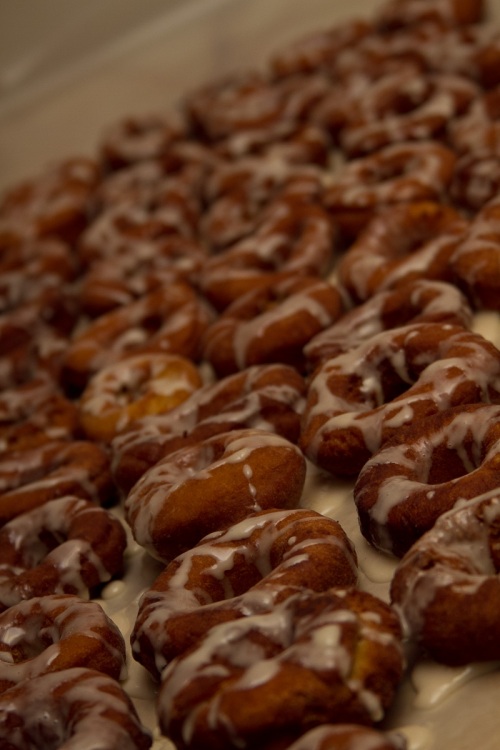 You will need a candy/oil thermometer for this for best results.

The Doughnuts: In  a large bowl, beat butter with mixer on medium for about 1 minute.  Add the sugar, baking powder, cinnamon, baking soda, ginger, nutmeg and cloves.  Beat until combined.  Beat in pumpkin, buttermilk, egg and egg yolk, and vanilla until combined.  Using a wooden spoon or a spatula, stir in flour until well combined.  Cover and chill for about 2-3 hours.  After the dough has chilled, roll it out to about 1/8″ thickness (if you want thicker, bigger doughnuts, roll out the dough to 1/4″ thickness).  Cut with a floured doughnut cutter.  Definitely dip the cutter in flour in between cuts.  Re-roll out the dough as necessary (or reserve the centers for doughnut holes).

The Icing: As the doughnuts cool, prepare the icing by beating together the confectioner’s sugar, milk and maple extract.  Drizzle over the doughnuts.  Best served warm or at room temperature.

Incorporating the flour into the pumpkin mixture 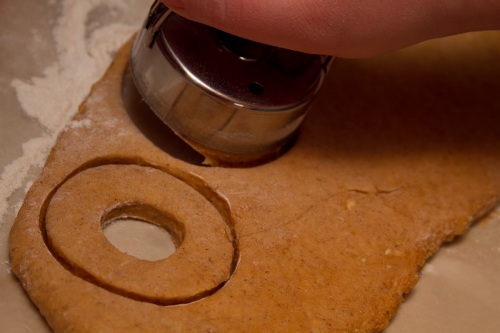 Rolling out and cutting the spiced pumpkin doughnuts

How to Clog Your Arteries Part 1

For the past couple of years, one of my friends has thrown a Bacon Party.  (She’s evil, but obviously well-loved.)  If you don’t know, a Bacon Party is a potluck party featuring only foods that contain bacon (or fake bacon for the vegetarians).  Each year I gain at least 3 lbs from this party.  Let me tell you – it’s totally worth it.  This year I made a couple of dishes to add to the melee — bacon cheddar knots and a pumpkin pie topped with walnuts, brown sugar and, of course, bacon.   Sadly, Mr. Kitchen had to miss the party because he was working.  Luckily I came home with two giant Tupperware containers filled with treats.  (I know, I’m totally evil, but if I’m not gonna fit in my wedding dress — he’s not fitting into his kilt.)

The cheddar bacon knots were surprisingly easy, though in preparation for that and the pie, Mr. Kitchen and I fried up an entire package of bacon.  I could feel the cholesterol and fat seeping into my pores — kinda gross, but damn tasty!  For any of you who are thinking that a bacon party is a brilliant idea, it is, but I would recommend starting on some sort of cholesterol medicine now, followed by lots of fiber.   On the plus side (like bacon needs another plus side), at least I couldn’t actually feel the presence of my gallbladder after this year’s party.

1 8 oz package cheddar cheese (or any cheese you prefer)

Combine flour and salt in large bowl.  In a separate bowl, mix yeast into water and let stand for a few minutes until the water fizzes a bit (stir if it doesn’t begin to fizz). Whisk oil into water/yeast mixture.  Make a well in the flour and pour water into center.  Using a rubber spatula, begin to fold the flour into the water center, gently incorporating and mixing outwards until all of the flour is combined.  The dough will be very soft.  Cover the bowl with plastic wrap and let sit until the dough has risen to double its size (approx 2 hours).  After the dough has risen, scrape it into an oiled jelly roll pan.  Lightly oil your hands and press the dough into the pan so that it is evenly filled. Cover the pan with plastic wrap (oiled) and let the dough rise again, approximately 1 hour.  While the dough is rising, cut the 8 oz block of cheddar into approximately 2 dozen pieces.  After the dough has risen for the second time,  use a pizza cutter to cut the dough into approximately 24 squares (6 length wise, four depth wise).

Preheat the oven to 350º. Cover 2 baking pans in foil and lightly grease.

Take a square of the dough and place about half a strip of bacon and 1 piece of cheese in the center.  Fold two of the opposing corners over each other.  With the other two opposing corners, twist them together, forming a knot on top.  Place the piece in the pan.  Repeat with remaining 23 pieces of dough.  Brush all of the knots with the egg was and bake for about 20 minutes, or until golden. 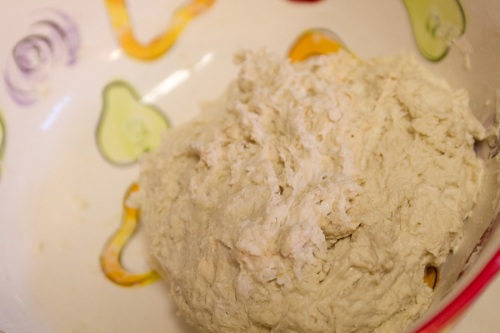 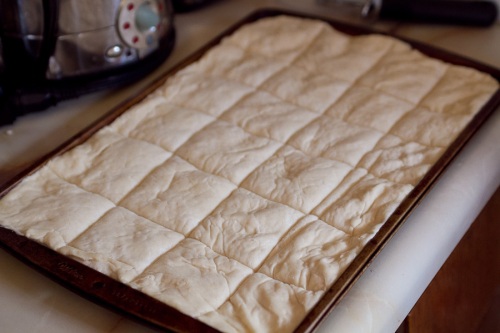 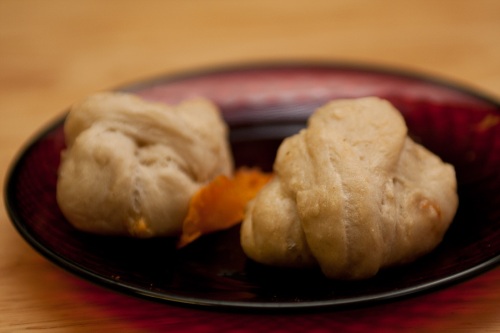 I won a cookbook giveaway!  Since Mr. Kitchen and I have started planning our wedding, I’ve become a devoted wedding blog reader.  I recently entered a giveaway hosted by OneWed for the Dam Good Sweet Cookbook by Beard nominee David Guas, and I won!  The cookbook features New Orleans-style desserts and I can’t wait to give it a try.  (How I’m going to fit into a wedding dress, I have no idea.)  Mr. Kitchen is in for a yummy fall!  Speaking of yummy, Mr. Kitchen and I have been working tons and tons over the past few weeks, and we are plum tired.  So tired, that I forgot to buy tickets for today’s Vendy Awards.  So instead of spending the afternoon tasting the delicious fare of some of the city’s best food trucks, we’re heading over to Eataly.  Something tells me my bank account is going to be very angry with me later… Hey, some girls shop for shoes — I shop for food!

Anyway, on to fall produce!  Next up: Carrots.  Definitely one of the most versatile of the fall vegetables, carrots can go in, well almost any dish, and one of the easiest fall dishes to prepare is a hearty, stick to your ribs beef stew.  Seriously all you need is the ability to chop, brown and boil to make stew.  I’ve used lots of different cuts of beef for stews but I recently tried giving short ribs a try.  I really liked the way it turned out — the marbled meat was definitely falling off the bone by the time the stew was done and it was absolutely tender.  I’m also a firm believer (and perhaps this is my Irish heritage talking), that you can put in almost any vegetables you’ve got lying around.

In a bowl, toss the short ribs with flour, salt and pepper.  In a large pot, heat oil and brown the short ribs on all sides.   Remove short ribs from pot.   In the remaining oil, saute shallots.  Once they are soft, add the meat back in and add the wine.  Cook over medium heat until the wine is halfway reduced, about 10 minutes.  Add beef stock, thyme, tarragon, carrots, turnips and celery and reduce heat, cooking meat until it is very tender (about 1.5 hours).   Add chopped potatoes and cook for an additional 45 minutes to an hour, until all vegetables and meat are completely tender.  Season with additional salt and pepper as desired.

Pour in the vegetables and herbs for short rib stew

Add the potatoes and cook until tender

Graduating from the Barbie Kitchen

My old kitchen was what we affectionately termed a Barbie kitchen.  Literally the size of a dollhouse kitchen, it came complete with a mini, under-the-counter size fridge and an Easy-Bake Oven.  I have no idea how I ever cooked things there — I had one square foot of counter space.  Let me repeat that.  ONE SQUARE FOOT.  It was a galley kitchen you had to turn sideways to walk in.  But I was single, so it was perfect for me.  I had the unicorn of NYC real estate –a backyard — and I threw summer dinner parties and bbqs.  But it came with lots of cooking complications.  Like my freezer not working.  And the fact that I could fit absolutely nothing in my fridge.  And ONE SQUARE FOOT OF COUNTER SPACE.  Can you imagine rolling out a pie crust in one square foot of counter space? Or making lasagna? Or chopping, well, anything?!?  My stove was no better.  I couldn’t fit a standard size roasting pan in there.  I had to get itty bitty cookie sheets.  The one blessing of that kitchen — it forced me to cook nearly every day.  I couldn’t fit leftovers in my fridge!

Truth be told, I learned a lot about myself living and cooking on my own.  I learned that I could never ever date someone who didn’t love food and who didn’t love my cooking.  My husband-to-be, who I met while in that apartment, became my ultimate taste-tester and sometimes regretful guinea pig.  I would venture to say he might have fallen in love with my lasagna and my cheesecakes before he fell in love with me, but he disagrees.  It’s with him that I’ve finally graduated to a Big Girl Kitchen, complete with ten times the counter space of the Barbie Kitchen and a real, life-sized refrigerator and oven.  I can cook whole meals in there!  So here’s me, cooking my way through life, love and everything in between.